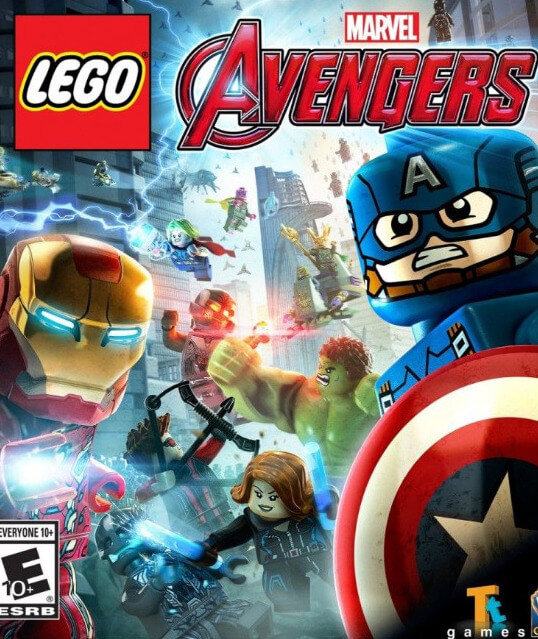 Lego Marvel's Avengers is a Lego-themed action-adventure video game developed by Traveller's Tales and published by Warner Bros. Interactive Entertainment, for the PlayStation 4, PlayStation 3, PlayStation Vita, Nintendo 3DS, Wii U, Xbox One, Xbox 360, Macintosh and Microsoft Windows. It is the spin-off to Lego Marvel Super Heroes and the second installment of the Lego Marvel franchise. It follows the plots of both The Avengers and Avengers: Age of Ultron as well as Captain America: The First Avenger, Iron Man 3, Thor: The Dark World, and Captain America: The Winter Soldier.

The game features characters from the Marvel Cinematic Universe as well as characters from comic books. Characters include Iron Man, Captain America, Hulk, Black Widow, Hawkeye, Scarlet Witch, Quicksilver, Thor, Ultron, Loki, Winter Soldier, Falcon, Vision and War Machine and some lesser known characters such as Devil Dinosaur and Fin Fang Foom. It includes the characters of the Avengers team along with many others. The game was released on 26 January 2016.

The gameplay is similar to Lego's long-running series of franchise video games, with a focus on puzzle-solving interspersed with action. Players often have to solve puzzles spread across the game environment, such as figuring out how to move a particular truck that is blocking their progression. As always, the game has its own unique quirks, for instance taking advantage of its large character library in areas that require two specific characters to team up in order to proceed. Boss battles also take the form of puzzles, often requiring careful timing. While action and fighting are spread liberally throughout the game, it is kept very child-friendly as per Lego custom. The game features New York City as the main large open-world hub, but also, for the first time, includes a dozen other movie significant areas players can travel to, including Asgard, Malibu, South Africa, The Helicarrier, the Bartons' farm, Washington DC and Sokovia. These hubs also feature heavy playability, with hundreds of side quests and bonus levels such as rescuing citizens in trouble, races, and more. The main story actually takes up a fairly small fraction of the game's total "completion". Whilst the game's story is predominantly focused on the two Avengers films there are single levels based on Captain America: The First Avenger, Iron Man 3, Thor: The Dark World and Captain America: The Winter Soldier.

The game features over two hundred playable characters, including some characters (but not all) returning from the previous game. The heroes are drawn not just from the Marvel Cinematic Universe, but the comics as well. Director Arthur Parsons stated "It's a celebration of everything Avengers. Comic books, movies, cartoons. It's everything you love about the Avengers in video games." Confirmed additional characters include Kamala Khan as Ms. Marvel, Sam Wilson's Captain America appearance, America Chavez, Jane Foster's Thor form, Wiccan and Speed. Every two characters have their own unique team-up abilities. There are even separate ones for what character is triggering the attack, meaning nearly 800 team-up moves.

In the Eastern European country of Sokovia, the Avengers—Iron Man, Captain America, Thor, Hulk, Black Widow, and Hawkeye—attack a Hydra facility commanded by Baron Wolfgang von Strucker in an attempt to retrieve a scepter that was previously used by Loki, Thor's adoptive brother. They encounter two of Strucker's test subjects, the Maximoff twins, Quicksilver and Scarlet Witch, before they succeed in apprehending Strucker and retrieving Loki's scepter. Scarlet Witch manipulates Iron Man's mind, causing him to see a haunting vision of the Avengers' defeat. She allows him to take the scepter as a flashback begins, explaining how the scepter ended up on Earth.

Loki encounters the Other, the leader of an extraterrestrial race known as the Chitauri and servant of Thanos. In exchange for retrieving the Tesseract, a powerful energy source of unknown potential, the Other promises Loki an army with which he can subjugate Earth. Nick Fury, director of the espionage agency S.H.I.E.L.D., and his lieutenant Maria Hill arrive at a remote research facility where physicist Dr. Erik Selvig is leading a research team experimenting on the Tesseract. Agent Phil Coulson explains that the object has begun radiating an unusual form of energy. The Tesseract suddenly activates and opens a wormhole, allowing Loki to reach Earth. Loki takes the Tesseract and uses his scepter to brainwash Selvig, Hawkeye, and many other agents to aid him. Maria and Agent Williams fight the brainwashed agents while Loki, Hawkeye, and Selvig escape in a stolen truck. Maria and Williams pursue them in another vehicle, fighting more brainwashed agents before the base explodes, allowing Loki to escape.

In response to the attack, Fury reactivates the "Avengers Initiative." Black Widow is sent to Calcutta to recruit Dr. Bruce Banner to trace the Tesseract through its gamma radiation emissions. Coulson visits Iron Man to have him review Selvig's research, and Fury approaches Captain America with an assignment to retrieve the Tesseract. Captain America begins having flashback of his missions in 1940 where he is fighting Hydra with his friend Bucky. While raiding Arnim Zola's train, Bucky falls off a cliff and is presumed to be dead.

In Stuttgart, Hawkeye steals iridium needed to stabilize the Tesseract's power while Loki causes a distraction, leading to a battle against Iron Man, Captain America, and Black Widow that ends with Loki's surrender. While Loki is being escorted to S.H.I.E.L.D., Thor arrives and frees him, hoping to convince him to abandon his plan and return to Asgard. After fighting Iron Man and Captain America, Thor agrees to take Loki to the S.H.I.E.L.D. Helicarrier. Upon arrival, Loki is imprisoned while Banner and Iron Man attempt to locate the Tesseract.

Captain America and Williams search through S.H.I.E.L.D.'s files cases and soon discovers that S.H.I.E.L.D. plans to harness the Tesseract to develop weapons as a deterrent against hostile extraterrestrials. As the group argues, Hawkeye and Loki's other possessed agents attack the Helicarrier, disabling one of its engines in flight and causing Banner to transform into the Hulk. While Fury and Maria fight Hawkeye, Captain America and Iron Man work to restart the damaged engine, and Thor attempts to stop the Hulk's rampage. Black Widow knocks Hawkeye unconscious, breaking Loki's mind control. Loki escapes from his cage and wounds Coulson before ejecting Thor from the airship using the prison cage that he was imprisoned in, but he gets out before the cage crashes. The Hulk falls to the ground after attacking a S.H.I.E.L.D. fighter jet (piloted by Stan Lee) sent to deal with him by Maria. While stranded in the air, Fury manages to motivate the Avengers into working as a team. They steal a Quinjet and use it to get to New York City. Loki uses the Tesseract, in conjunction with a device Selvig built, to open a wormhole above Stark Tower to the Chitauri fleet in space, launching his invasion.