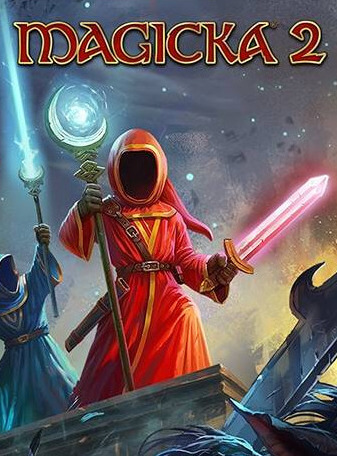 Magicka 2 is an action-adventure video game, the sequel to Magicka, for Microsoft Windows, Mac OS X, Linux and PlayStation 4. It was released on May 26, 201 and was announced at Sony's E3 2014 media briefing with a trailer. Instead of being developed by Arrowhead Game Studios, the title was developed by Pieces Interactive alongside the publisher Paradox Interactive.

The opening of Magicka 2 starts with a backstory, how 1 through 4 wizards from the Order of Magick saved Midgard from certain doom multiple times (the story of Magicka). Due to this success, the Order of Magick decided to expand by founding multiple wizard schools all over Midgard. However, conflict between the schools grew, eventually sparking the Wizard Wars. The aftermath of the wars resulted in many wizards decimated, and those who survived tread the shadows of their former glory. Without wizards destroying the human's way of life, the Golden Age of Man has begun. During this period of calmness, a seer named Nostrir the Soothslayer has prophesied that a child, infused with magick from the magickal residue caused by the Wizard Wars, was born somewhere in Midgard. This very child, once of age, will lead Midgard into a better place, free of suffering. However, the prophesy also told that an opposing force would seek to prevent the child from realizing her power. Vlad, back from his multi-decade vacation, returns to Aldrheim only to find the castle in ruins. Hearing Nostrir's prophesy, Vlad decides to guide 1 through 4 wizards from the ruins of Aldrheim to save the prophesied child.

Magicka 2 received mixed reviews from critics upon release. On Metacritic, the game holds score of 69/100 for the PC version based on 37 reviews, and 72/100 based on 18 reviews for the PlayStation 4 version.

IGN awarded the game a score of 7.7 out of 10, saying "Though it may occasionally test your patience, Magicka 2's charm and depth make it a really fun co-op experience". PCGamesN awarded it 6 out of 10, saying " At the moment it’s functional, sometimes fun, but only something that should really be considered if you’ve got three chums who are guaranteed to play with you.". GameSpot awarded it 7 out of 10, saying "Put Magicka 2 next to its 2011 predecessor and you’ve got a before-and-after comparison straight out of a weight-loss advertising campaign." WGRank 6.2 out of 10 based on Good points: Skill based magic - co-operative - good combat system and Bad points: Some bug need to solve - difficult to point when doing solo.

Screenshots from the game Magicka 2

Hello Friend! On this page, you can download the full and latest version of the game Magicka 2 on your MacBook Free. This is Cracked Game.
Comments 0 on "Magicka 2 for Macbook"
No comments yet. Be the first!
Вход Регистрация
Category
TOP 5 Games