Broken Sword: The Shadow of the Templars (also known as Circle of Blood in the United States) is a 1996 point-and-click adventure game developed by Revolution Software. It is the first game in the Broken Sword series. The player assumes the role of George Stobbart, an American tourist in Paris, as he attempts to unravel a conspiracy. The game takes place in both real and fictional locations in Europe and the Middle East.

In 1992, Charles Cecil began researching the Knights Templar for the game after he, Noirin Carmody and Sean Brennan conceived Broken Sword. It was built with Revolution's Virtual Theatre engine. This was also used for the company's previous two games. Cecil co-wrote and directed the game, while Eoghan Cahill and Neil Breen drew the backgrounds in pencil and digitally colored them in Photoshop. The game has a serious tone, but features humor and graphics in the style of classic animated films.

Critics lauded Broken Sword's story, puzzles, voice acting, writing, gameplay, and music. The game received numerous award nominations and wins. It achieved commercial success as well, with one million copies sold by 2001. Topping several lists, it is known as one of the greatest examples of adventure gaming. Many developers of later games have cited Broken Sword as an influence.

After its initial release on Microsoft Windows, Mac OS, and PlayStation, it was ported to the Game Boy Advance, Palm OS, and Windows Mobile. The game spawned a number of sequels collectively known as the Broken Sword series. From 2009 to 2012, a director's cut version was released on Wii, Nintendo DS, Microsoft Windows, OS X, iOS, Android and Linux.

Broken Sword is a 2D adventure game played from a third-person perspective. The player uses a point-and-click interface to interact with the environment and to guide protagonist George Stobbart through the game's world. To solve puzzles and progress in the game, the player collects items that may be combined with one another, used on the environment, or given to non-player characters (NPCs). The protagonist converses with NPCs via dialogue trees presented through "conversation icons" to learn about the game's puzzles and plot. Clues and other information are obtained by clicking on items in the inventory and on objects in the environment. The player navigates with a map, to which new locations are added as the story unfolds. Unlike in most adventure games at the time, the protagonist's death is possible, after which the player starts from the last save point.

As the game begins, American tourist George Stobbart witnesses a terrorist attack at a café in Paris, during which a clown steals an old man's briefcase and detonates a bomb. Soon after, George meets Nicole Collard, a journalist who is photographing the scene. George investigates the area to help Nicole gather information about the attack. He finds the clown's discarded nose, a tissue covered in theatrical greasepaint, and a piece of fabric from the clown's jacket in the sewers around the cafe and learns that a man was seen escaping with a briefcase. After Nicole discovers the address of a costume shop inside the clown nose, George learns from that shop's owner that the nose and theatrical greasepaint had been purchased by a man named Khan.

George travels to the hotel where Khan is staying, where he obtains an ancient manuscript from Khan's hotel safe. After evading two hired thugs, Flap and Guido, George takes the manuscript to Nicole, who deduces that it is related to the Knights Templar. In a nearby museum, George finds a tripod that is illustrated in the manuscript. He soon travels to the excavation site in Lochmarne, Ireland where the tripod had been discovered; and, there, he obtains a gem identical to one on the manuscript. After facing a goat, George finds an entrance to a Templar chapel beneath the local castle ruins, where he discovers a mural of a hanged man with "Montfauçon" written underneath.

George returns to Paris and learns from Andre Lobineau, a colleague of Nicole's, that Montfauçon is a location in Paris. Flap and Guido attempt to steal the tripod from the museum; but they are beaten to the theft by Nicole, who gives the artifact to George. In the sewers of Montfauçon, George spies on a secret meeting of people who claim to be the Templars, and he learns of their plan to find the Sword of Baphomet. After the group leaves, George uses the tripod and gem in the underground chamber to reveal the name of a village in Syria: Marib. He travels to the village and discovers that Khan has been looking for him. At a nearby rock formation called the Bull's Head, George finds a lens and deduces that it is represented on the manuscript as a crystal ball. He also discovers an idol with three bearded faces, Baphomet; and a Latin inscription that describes Britain. Khan arrives and holds George at gunpoint, but George manages to escape.

Back in Paris, George learns from Andre that the manuscript mentions the Spanish De Vasconcellos family, who were once connected with the Templars. At the family's villa, George speaks to the family's sole surviving member, a Countess, who leads him to the De Vasconcellos mausoleum. There, George discovers the family's chalice, which the Countess entrusts to George. She asks him to find her missing ancestor, Don Carlos. In Paris, George uses the lens in the church at Montfauçon and discovers a hidden image of a burning man. In the church, George find Don Carlos' tomb, which is inscribed with a series of biblical references.

Screenshots from the game Broken Sword: The Shadow of Templars

Broken Sword: The Shadow of Templars for mac game download 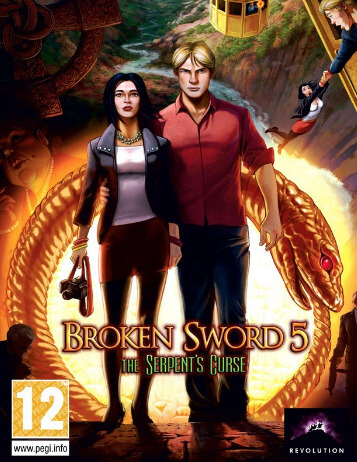