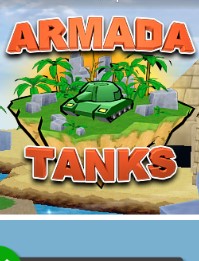 Armada Tanks (from the English - “Armada of Tanks”, retail name is “Tanks: Miniature War”) is a computer arcade casual game developed by Enkord and released by Alawar Entertainment. The publisher was Dragon Flight, a division of Akella.

The game is an “ideological continuation” of the popular console game Battle City, but it is made in three-dimensional graphics using Sell Shading technology.

The gameplay is similar to the classic Battle City: the player is entrusted with the management of the tank, with the help of which it is necessary to destroy the tanks of rivals, protect the headquarters or perform another task, which is given at the beginning of each level.

In between fights, there is the opportunity to visit a workshop in which you can improve the rate of fire and power of the weapon, equip your tank with additional armor or add mobility. In total, there are 5 types of improvements (4 levels) and 6 types of weapons in the game. In addition, the developers announced 60 levels, 10 bonuses, 8 variations of enemy tanks, 4 levels, 3 bosses and several fortifications.

Unlike classic games, the gameplay of Armada Tanks is much simpler due to the fact that the player’s tank has a movable turret with a rotation angle of 360 degrees, which allows you to destroy armada of enemies from afar in any direction, since they do not have the ability to rotate the turret (this property has also one type of enemy turret).

Screenshots from the game Armada Tanks

Hello Friend! On this page, you can download the full and latest version of the game Armada Tanks on your MacBook Free. This is Cracked Game.
Comments 0 on "Armada Tanks for Macbook"
No comments yet. Be the first!
Вход Регистрация
Category
TOP 5 Games