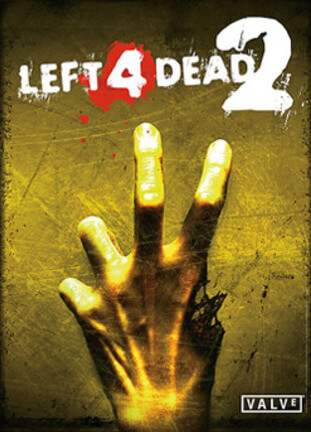 Left 4 Dead 2 is a 2009 multiplayer survival horror game developed and published by Valve. The sequel to Turtle Rock Studios's Left 4 Dead, it was released for Windows and Xbox 360 in November 2009, Mac OS X in October 2010, and Linux in July 2013.

Left 4 Dead 2 builds upon cooperatively focused gameplay and Valve's proprietary Source engine, the same game engine used in the original Left 4 Dead. Set during the aftermath of an apocalyptic pandemic, Left 4 Dead 2 focuses on four new Survivors, fighting against hordes of zombies, known as the Infected, who develop severe psychosis and act extremely aggressive. The Survivors must fight their way through five campaigns, interspersed with safe houses that act as checkpoints, with the goal of escape at each campaign's finale. The gameplay is procedurally altered by the "AI Director 2.0", which monitors the players' performance and adjusts the scenario to provide a dynamic challenge. Other new features include new types of special infected and an arsenal of melee weapons.

The game made its world premiere at E3 2009 with a trailer during the Microsoft press event. Prior to release, it received a combination of positive and negative critical and community reactions. It attracted an unusually high volume of pre-release controversy about the game's graphic content. In response, alterations were made to the cover art and both Australia and Germany refused to rate the unmodified edition at the time of release. After release, however, the game was met with positive reviews by critics.

Like its predecessor, Left 4 Dead 2 is a first-person shooter with a heavy emphasis on cooperative gameplay. The game presents five new campaigns, each composed of three to five smaller levels. As in the first game, each campaign is presented in menus and loading screens as a film starring the four Survivors; and features, upon completing a campaign, a faux credits screen which acts as the final scoreboard for the players and recaps certain performance statistics for the group. In every campaign, most levels involve the Survivors attempting to reach a safe zone and close the door once they are all safely inside. However, the final level in each campaign requires the Survivors to call for rescue and either survive a prolonged onslaught until rescue arrives, pass through an especially challenging gauntlet of Infected to reach an escape vehicle, or (in Dead Center and The Passing) collect and utilize fuel cans to enable their escape.

Each Survivor can carry one each of five categories of equipment: primary weapons, secondary weapons, throwable weapons, major medical supplies (which also includes ammunition upgrades) and minor medical supplies. Primary weapons are broken down into four tiers based on their availability and attributes. Tier one weapons (such as the SMG and Chrome Shotgun) deal damage relatively slowly and serve as basic offensive weapons. Tier two weapons (such as the Assault Rifle and Combat Shotgun) deal damage faster and often appear in later maps of each chapter. The two tier three weapons (Grenade Launcher and M60) differ from tier one and two weapons both because of their rarity and because players cannot refill their ammunition from ammunition dumps. They deal damage quickly at the cost of limited ammo. Tier four weapons are all mounted weapon systems and carry unlimited ammunition. The mounted weapons deal damage the fastest, but at the cost of overheating after a period of non-stop use. The mounted weapons are in set positions in maps and have a fixed arc of fire. They cannot be given ammunition upgrades like other weapons and players cannot utilize the laser sights attachment with them. There are three types of secondary weapons available: melee weapons, small caliber pistols (that can be dual wielded) and large caliber pistols. Although melee weapons cause extra damage to Infected when struck, the Survivors can use any other weapon or item for weaker melee attacks that can push the Infected back. Players also carry a flashlight with infinite battery life, the use of which enables players to see in the dark (with the downside of the player gaining the attention of the Infected much faster). They may also carry a single first aid kit, special ammo pack, or a defibrillator in their major medical supply slot; in addition to either pain pills or an adrenaline shot in their minor medical supply slot. They may also carry a single throwable weapon—Molotov cocktails to set an area on fire; pipe bombs to attract any nearby Infected to the flashing light and sound it makes until it explodes; and jars of Boomer bile, which attracts Common Infected to whatever it hits (e.g. fires, Special Infected, each other).

To enable situational awareness of other Survivors, players are shown the health and status of their fellow survivors. If a player does not have direct sight of another Survivor (e.g. a wall is blocking their view of the others), they will be shown the Survivor's highlighted silhouette. The Survivors are also susceptible to friendly fire, forcing players to exercise caution when shooting or swinging their weapons. As Survivors take damage, they move more slowly; if a Survivor's health drops to zero, they are incapacitated and left to fight off the Infected using a handgun until rescued by another Survivor. If a Survivor dies, they remain dead until the next level, unless revived by a defibrillator, or, in Campaign or Singleplayer mode, reappear in a "Rescue Closet" to be freed by other Survivors. Should all Survivors die or be incapacitated, the game will end, at which point the players may restart that chapter or quit the game.

Like its predecessor, Left 4 Dead 2 is set in the aftermath of a worldwide pandemic of an infectious disease known as the "Green Flu", which rapidly transforms humans into zombie-like creatures and mutated forms that demonstrate extreme aggression towards non-infected (much like the infected in 28 Days Later). Few humans are immune to the disease, still carrying the infection but showing no symptoms. The Civil Emergency and Defense Agency (CEDA) and the U.S. Military create safe zones to attempt to evacuate as many American survivors as possible. Left 4 Dead 2 introduces four new Survivors: Coach, Ellis, Nick, and Rochelle, who are immune to the disease and have individual back stories that are provided through character dialogue. While the game is intended as a continuation of the original, occurring one week after the first game begins, Valve decided to create a new group of Survivors due to the change in location. Like the first game, the five campaigns in Left 4 Dead 2 are set across a story arc, set in the Southern United States, which starts in Savannah, Georgia, and ends in New Orleans, Louisiana. The four Survivors have to fight their way through hordes of Infected, using safehouses along the way to rest and recuperate in order to reach extraction points.

Left 4 Dead 2 features a new cast of human Survivors, which include: Coach (voiced by Chad Coleman), a portly high-school football coach with a bad knee (although it does not affect gameplay); Nick (voiced by Hugh Dillon, motion capture by Adam Karst), a cold and cynical gambler and con artist; Rochelle (voiced by Rochelle Aytes), a low-level production assistant reporting on the evacuation for a local television station; and Ellis (voiced by Eric Ladin), a friendly (and rather talkative) mechanic who often talks about his friend Keith and their many misadventures. In addition to the four playable characters, Left 4 Dead 2 also features a supporting character in the form of Virgil (voiced by Randall Newsome), a Cajun boat captain, who appears (voice only) in the game's final three campaigns.

Screenshots from the game Left 4 Dead 2

Hello Friend! On this page, you can download the full and latest version of the game Left 4 Dead 2 on your MacBook Free. This is Cracked Game.
Comments 5 on "Left 4 Dead 2 for Macbook"
Вход Регистрация
Category
TOP 5 Games