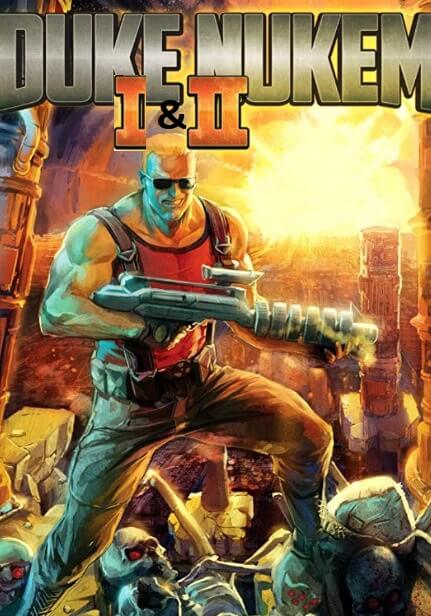 Duke Nukem is a 2D platform game developed and published by Apogee Software, featuring the adventures of the fictional character Duke Nukem. The game was followed by another 2D scroller, Duke Nukem II, in 1993. The series made the jump to 3D graphics with Duke Nukem 3D in 1996, which became the most popular of the three games.

The main objective of the game is to get to the exit of each level, while destroying enemies and collecting points. Many objects onscreen can be shot including boxes, obstacles and blocks. Besides points, some collectibles include health powerups, gun powerups, and some inventory items with special abilities. The final level of each episode has no exit, and is instead completed by finding and defeating Dr. Proton.

At the end of every level (with the exception of the last level in each episode), the player can receive up to seven 10,000 point bonuses, earned by making certain achievements in the level, such as destroying all cameras. At least two other Apogee titles, Duke Nukem II and Rise of the Triad, have similar end-of-level bonuses.

The game is set in the year 1997. Dr. Proton is a madman, determined to take over the world with his army of Techbots. Duke Nukem, the eponymous hero, takes upon the task of stopping him. The first episode takes place in the devastated city of Los Angeles. In the second episode, Duke chases Dr. Proton to his secret moonbase. In the third episode, Dr. Proton escapes into the future, and Duke pursues him through time, to put an end to his mad schemes.

According to programmer and co-creator Todd Replogle, John Carmack helped him program some low-level parts of the game code in assembly language.

Due to technical limitations the game world scrolls by shifting 8x8 "blocks" rather than individual pixels. Similar techniques are used in e.g. Zeliard, Cosmo's Cosmic Adventure and Duke Nukem II. Console and arcade platform games would typically perform this using dedicated hardware, such as the PPU in the NES which can scroll the background.

The graphics borrowed heavily from other games, such as Turrican and the MS-DOS version of Mega Man.

Legal concerns with the game name

After the game's release, Apogee Software became aware that the Captain Planet and the Planeteers animated series featured a character with the same name (Duke Nukem) and therefore to avoid a lawsuit, the software house renamed the 2.0 version of its game Duke Nukum. It later turned out that Duke Nukem was not a registered name, so Apogee registered it and used the original Duke Nukem name in the sequels.

Scott Miller estimates that the game eventually sold between 60,000 or 70,000 copies.

Duke Nukem II: Escape From Alien Abductors! is a platform game developed by Apogee Software and released December 3, 1993. The game consists of four episodes (of eight levels each), the first available as shareware. It is the follow-up to 1991's Duke Nukem, and followed by Duke Nukem 3D in 1996. Todd Replogle was the primary designer of all three games.

In 1998, the evil Rigelatins plan to enslave Earth, and they kidnap Duke Nukem, to use his brain to plot the attack for their forces. Duke breaks free to save the world again.

The player's goal is to proceed through the levels collecting items, destroying enemies to the level exit and at the final level, defeat the super alien boss. In one level of each episode Duke needs to destroy radar dishes to progress.

Duke Nukem can pick up weapons along the way. There are four types of weapons: His regular default gun, the flamethrower (which can shoot through walls and launch him in the air), the laser (which can shoot through anything) and the rocket launcher. Duke can also get a rapid fire powerup. Health items can be collected to heal damage Duke receives or to boost score points at full health. Keycards need to be collected to access past the force fields and keys must be obtained to get past locked doors. A cloaking device makes Duke temporarily invincible and disables the super force fields.

Movement through the levels mainly consists of jumping onto platforms, climbing ladders, operating elevators, using teleporters, hovering over blowing fans and climbing hand-over-hand across pipes or girders. At the end of every level (with the exception of the last level in each episode), the player can receive up to seven 100,000 point bonuses, earned by making certain achievements in the level, such as destroying all cameras.

Screenshots from the game Duke Nukem 1+2

Hello Friend! On this page, you can download the full and latest version of the game Duke Nukem 1+2 on your MacBook Free. This is Cracked Game.
Comments 0 on "Duke Nukem 1+2 for Macbook"
No comments yet. Be the first!
Вход Регистрация
Category
TOP 5 Games