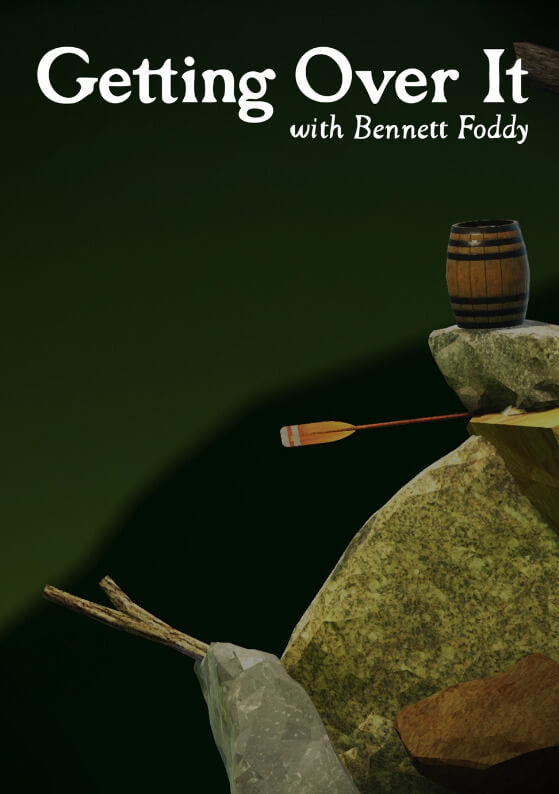 Getting Over It with Bennett Foddy free Mac Game

Getting Over It revolves around a silent man by the name of Diogenes – who, somewhat true to his namesake, resides in a large metal cauldron – and wields a Yosemite hammer, which he can use to grip objects and move himself. Using the mouse or trackpad (controllers are supported but make the game harder because of the lack of precision in the joysticks), the player tries to move the man's upper body and sledge hammer in order to climb a steep mountain.

The game is accompanied by voice-over commentary by Bennett Foddy discussing various philosophical topics. The commentary also provides quotations relating to disappointment and perseverance when significant progress is lost by the player.

The game increases in difficulty as the player progress up the mountain. There are no checkpoints; the player is at a constant risk of losing some or all of their progress. The game concludes when a player reaches the highest point of the map and then enters space. Upon reaching the conclusion, a message asks players if they are recording the game play. When a player indicates they are not, the game provides access to a chatroom populated by other players who have completed the game.

Foddy had been drawn to difficult games while growing up; living in Australia in the 1980s and 1990s, he was limited to what was brought into the country through imports, with many of these being games that lacked any type of save mechanism and required players to be sent back to the start of the game if their character died, such as Jet Set Willy. Into the 1990s, video game developers in the United States and Japan began adding means to save or have checkpoints, so players would not have to return to the start on death. Foddy said, "The flavor of being sent back gradually disappeared up to the point now where it's this boutique thing. People of a certain age still have that taste, or maybe everyone has it, but it's been written out of the design orthodoxy."

More recently, Foddy had seen a return of difficult games such as through the Dark Souls series. In August 2017, Foddy observed that while there was outcry by players over the saved game mechanism in Hellblade: Senua’s Sacrifice, which reportedly would erase the player's save file if they died, other players readily took to the challenge, showing renewed interest in games that were difficult by design. He said, "whenever you see something that disproves a strongly held design orthodoxy it's extremely exciting because it opens up new avenues for exploration", and considered Getting Over It as his exploration of this new development space.

Getting Over It was aimed towards "a certain kind of person, to hurt them" and took inspiration from Sexy Hiking, a similar game released by Czech video game designer Jazzuo in 2002.

Getting Over It's difficult gameplay was praised by reviewers, including PC Gamer writer Austin Wood. Rock, Paper, Shotgun listed it as one of the best PC games of 2017 and GameSpot said it might have been the "weirdest game" to come out of 2017. Polygon ranked it 36th on their list of the 50 best games of 2017.

An Easter egg to Getting Over It appears in the game Just Cause 4. At a point on the game map, the player can guide the protagonist to where a cauldron and hammer are located. Activating them puts the game into a side-view mode, challenging the player to move about scattered obstacles as in Getting Over It, with Bennett Foddy narrating atop about the folly of the exercise and meta-humor of the Easter egg. Diogenes was added as a playable character to the crossover fighting game Indie Pogo in May 2019.

Screenshots from the game Getting Over It with Bennett Foddy

System requirements Getting Over It with Bennett Foddy for Mac Os:

Getting Over It with Bennett Foddy for mac game download