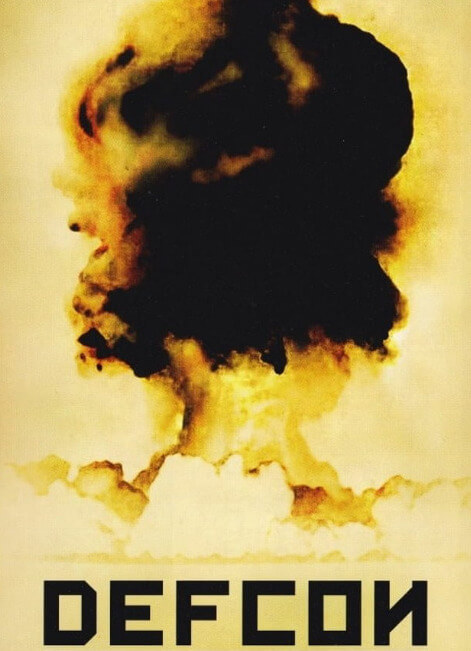 DEFCON (stylised as DEFCOИ and sometimes subtitled Everybody Dies in the North American version and Global Thermonuclear War in the European version) is a real-time strategy game created by independent British game developer Introversion Software. The gameplay is a simulation of a global nuclear war, with the game's screen reminiscent of the "big boards" that visually represented thermonuclear war in films such as Dr. Strangelove, Fail-Safe, and especially WarGames.

The game has been available by download since September 2006 through Introversion's web store and Steam. On 5 April 2007, publisher Encore announced they would be publishing the game in the United States, and had ordered an initial 50,000 copies of the game for retail. In the UK it was released for retail on 15 June 2007 and for a limited period included the developer's first game Uplink.

Players are given a 1980s vector graphics computer-themed world map, a varied arsenal of nuclear and conventional weaponry, and a primary objective: destroy as much of the enemy's population as possible while having as little of one's own population destroyed as possible. A typical game will see civilian casualties numbering in the millions (megadeaths) while players try their hand at annihilating their opponents.

In most games, all sides take heavy losses, but the player with the highest score wins. Players' scores are determined according to one of three schemes: Default (gain 2 points for 1 megadeath caused, lose 1 point for 1 megadeath suffered), Survivor (gain 1 point per million survivors in the player's territory) or Genocide (gain 1 point for each megadeath caused); though functionally identical in a one-on-one conflict, each scoring scheme suggests large differences in strategy in larger multiplayer conflicts.

Gameplay time can be varied by configuring the speed at which events progress from real-time (1 second in-game:1 second out-of-game) to 20* real-time. Most games last 30 to 40 minutes while real-time gameplay can last more than eight hours, depending on the mode of scoring. There is also an "Office" mode of play in which the game is permanently real-timed and can be minimised to run in the background of other computer activities, allowing the player to check in only when important events take place, and only for so long as it is necessary to modify the standing orders of each of the player's assets. The game offers six territories that may be selected by a player or assigned to an AI opponent.

DEFCON is a streamlined real-time strategy game, with no unit production (except for automatic fighter regeneration), resource collection, or technology tree upgrades. Players choose and position their forces at the beginning of the game. A countdown system prevents games from disintegrating prematurely. Gameplay begins at alert level DEFCON 5 and counts down to DEFCON 1 (the highest alert level). Each upgrade in alert level brings more possibilities.

Once DEFCON 1 is reached, the game proceeds until a certain percentage (80% by default) of the total number of nuclear missiles available to all players have been launched or destroyed. Once this occurs, a victory countdown begins (45 game minutes by default) and the final score is announced when this countdown runs out.

A DEFCON game can host up to six human or AI players. DEFCON also features local multiplayer capability, i.e. on LAN. Alliances can be formed, broken, or renegotiated at will with human players. Alliances with CPU-controlled players can only be set at the start of the game. Allied players share radar coverage and line of sight, but there is no allied victory and there is only one winner. This means that almost all alliances are broken by the end of the game.

The chat system features a public channel, in which all players may communicate, as well as channels private to specific alliances, and direct player-to-player private messaging.

All players start as members of a single alliance, and attempts to stay on top as the alliance disintegrates. The score is determined not by the enemy population killed, but by which territory has the highest percentage of survivors at the end of the game.

In office mode, the game runs in real-time and cannot be sped up. The game can be quickly forced to the background making the computer available for other use. While the game continues to run in the background, a system tray icon will notify the gamer of certain events as they occur. The office mode hotkey, sometimes referred to as the boss key, is activated by striking the escape key twice in rapid succession. A game in office mode lasts no more than six hours. The boss key is available in all game modes, but it is designed for this mode in particular.

Users can modify texture, sound, localization, etc. files that are found in the game's program files. The source code used to be available for purchase on Introversion's official store, however it has been removed in September 2016 and has not been available since then. A mod forum is available on the official forum, and a user-made list (open domain) is listed on the official website.

Screenshots from the game Defcon Hello Friend! On this page, you can download the full and latest version of the game Defcon on your MacBook Free. This is Cracked Game.
Comments 0 on "Defcon for Macbook"
No comments yet. Be the first!
Вход Регистрация
Category
TOP 5 Games