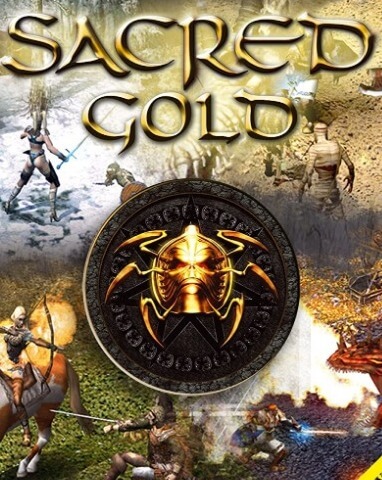 Sacred is an action role-playing game for Microsoft Windows and Linux released in 2004. It takes place on the magical continent of Ancaria, with characters of various races (dark elf, vampiress, dwarf, etc.) each with their own missions. More than 1.8 million copies of the game were sold worldwide. Two expansion packs were released for the game in 2004 and 2005. In 2008 Linux Game Publishing announced that they would port the game to the Linux operating system.

Sacred was developed by Studio II Software and Ascaron Entertainment and published in 2004 by Encore in the USA release.

Upon beginning the game, players are given a choice to start with one of six different character types:Gladiator, Dark Elf, Wood Elf, Vampiress, Battle-Mage and Seraphim. The Daemon and Dwarf were additional characters added in the expansion Sacred Underworld and included in Sacred Gold.

Each character begins in a different part of the area around a town in Ancaria (the continent that Sacred takes place within), and with a different starting quest. For example, the Gladiator starts in a colosseum, enslaved by his master, while the Seraphim starts in a church. The Dark Elf starts on a cliff with a Wood Elf companion. Throughout the game, the characters all receive different sub-quests.

Each character class is also restricted to a certain set of items, and has a different set of skills. To increase these skill levels, characters must find runes that correspond to those skills, a rather novel system in contrast to the more mainstream model of skill points. Some character classes have identical skills, but the runes from one class cannot be used to advance skills in another class. Runes may be traded and used for crafting.

Sacred features a vast array of items that can be obtained from shops, various containers (chests, barrels, graves...), dead monsters or "magical hiding places" in many of the rocks and bushes throughout Ancaria, which are indicated by a yellow sparkle. Many of the items can be only equipped by one type of character, like wings, which can only be equipped by a Seraphim.

There are also several potion types, such as the typical health heal, but there are other types, like Potions of Undead death, which stops Undead from reviving once players kill them, and "Potions of Concentration", which regenerate players' combo attacks so they can be used faster. There are no mana-heal potions in Sacred, because mana is not a feature of the game. Also, monsters occasionally drop a rune that increases a certain skill for a certain character, if used.

If the player owns a horse several different types of saddles can be bought to be used on it. These saddles increase the speed, defense, and damage done by the horse. Only one horse may be owned at a time, and the horse can be damaged and killed.

Sometimes, a monster drops a set item. Much like in Diablo II these set items will become much more powerful when gathered together and are very useful and sought-after in multiplayer games. However, this is not to say that unique items are inferior to set items. Unique items are usually individually better than set items.

Some items also can be imbued with better stats. If players take an item with a number of "slots," indicated by small boxes in the inventory screen, they will be able to imbue it by taking it to a blacksmith and then using either jewellery, a rune, skeleton skull or one of the blacksmith's techniques on it up to as many times as there are slots in it. Once imbued players can remove one rune or piece of jewelry from it, but all other items in the slots are lost when they do this. Though players cannot use a rune or jewelry which is not of their class, they can socket it in an item to gain the benefit of its magical and possible stat-raising properties.

Every character in Sacred has a different set of skills that are available to them. The only way to obtain them is to find a rune of that particular skill and use it to make it available to use for players. Each character has between 11 and 22 different skills that can be unlocked and used. To increase their level in a skill, players must find another rune for that skill and use it. There are also several "combo masters" spread throughout Ancaria, which can combine up to four separate skills into a combo, which players can use in the game. The combo masters can also trade runes they cannot use or do not need for a rune of their choice.

Screenshots from the game Sacred Gold

Hello Friend! On this page, you can download the full and latest version of the game Sacred Gold on your MacBook Free. This is Cracked Game.
Comments 1 on "Sacred Gold for Macbook"
Вход Регистрация
Category
TOP 5 Games