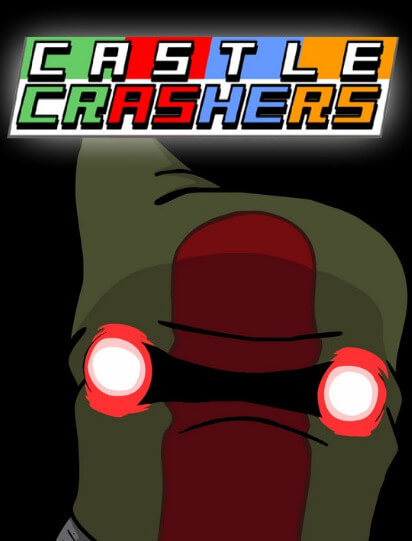 Castle Crashers is a 2D indie-game style beat 'em up video game developed by The Behemoth. It features music created by members of Newgrounds. The Xbox 360 version was released on August 27, 2008 via Xbox Live Arcade as part of the Xbox Live Summer of Arcade. The PlayStation 3 version was released in North America on August 31, 2010 and November 3, 2010 in Europe via the PlayStation Network. A Microsoft Windows version, exclusive to Steam, was announced on August 16, 2012. The game is set in a fictional medieval universe in which a dark wizard steals a mystical gem and captures four princesses. Four knights are charged by the king to rescue the princesses, recover the jewel, and bring the wizard to justice.

On June 15, 2015, The Behemoth announced Castle Crashers Remastered, a remastered version of the game for Xbox One, while the Steam version received it in the form of a free update. The remastered version features higher quality textures, uncapped frame-rate, performance improvements, and an additional mini-game. This version later released for the Nintendo Switch and PlayStation 4 on September 17, 2019.

Castle Crashers is a side-scrolling beat-em-up that incorporates a small number of role-playing video game elements. After selecting a character, the player then selects a starting stage through an overworld map. After completing a stage, the player has the choice to revisit it or to move to another stage. The map also displays shops where the player character can buy items and weapons using coins gained from defeated foes and chests. Arena stages can be unlocked where the player character can take on challenges to unlock additional characters.

Castle Crashers supports cooperative gameplay for up to four players, either locally or online. The game progression in terms of what stages are unlocked is defined by the player who is furthest along, although some levels require all players to have unlocked them before proceeding to them; however, each player character will gain experience points and acquire wealth, weapons, and animal orbs independently as they progress with the rest of the party. In each stage, the player can use melee and combination attacks. Each character has a unique magical ability in order to defeat foes and a health meter that, if drained from enemy attacks, will cause the character to fall in battle. In single player mode, this ends the stage; however, in cooperative multiplayer other players may attempt to revive the downed character.

Characters gain experience points by damaging foes which allow the character to level up. Each level gained allows the player to allocate points towards the character's four basic combat attributes. Certain level advances also grant new combination attacks. Progress is tracked for each of the playable characters separately. The character's magic level is also tracked by a meter and regenerates over time. Numerous weapons can be found in the game, each that have various effects to the character's attributes when equipped. The player can find animal companions for their character that may assist in battle, improve the character's attributes, or provide another special ability such as increased treasure earned from defeated foes.

Each version of the game features two minigames. In Arena, the first minigame, player characters attempt to survive through several waves of enemies, or fight each other. This minigame is available on all versions. The Xbox 360, Mac OS X and Microsoft Windows versions feature a minigame called "All You Can Quaff," a button-mashing contest to attempt to eat as much food as possible. The PlayStation 3 version, however, features a Volleyball minigame for up to four players and four AI characters.

Castle Crashers is set in a fictional medieval universe. It begins with four knights attending a party in a king's castle. During the party, a dark wizard arrives, stealing a mystical gem and capturing four princesses. The king sends the knights to retrieve the gem, rescue his daughters, and bring the wizard to justice. The knights encounter several enemies along the way, including, but not limited to, other knights, multiple encounters with a cyclops and his friend, thieves, a giant "catfish", factory workers, monstrous oceans with ninja pirates, demons, necromancers, and alien invaders. As the knights progress they succeed in rescuing the princesses, and ultimately the journey culminates in a final showdown with the wizard. The knights emerge victorious from the confrontation, having defeated the dark wizard, rescuing all of the king's daughters, and recovering the mystical gem. The knights then ride the reclaimed gem through several empty battlefields on their trip back to the castle. At the castle the king brings one of his daughters for one of the knights to kiss, her face veiled throughout the entire game. As with previous levels, the players fight to the death to claim a kiss from the princess. However, when the winner tries to do so this time, the princess is revealed to be a clown that blankets the screen in an animation.

Screenshots from the game Castle Crashers

Hello Friend! On this page, you can download the full and latest version of the game Castle Crashers on your MacBook Free. This is Cracked Game.
Comments 0 on "Castle Crashers for Macbook"
No comments yet. Be the first!
Вход Регистрация
Category
TOP 5 Games