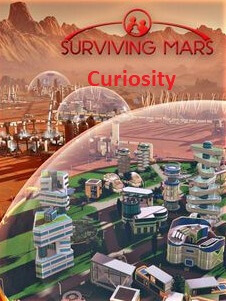 Colonize Mars and discover all the secrets of the Red Planet (preferably with minimal losses). Welcome home The time has come to land on Mars and establish the first active colony in the history of mankind on the Red Planet. All you need is supplies, oxygen, decades of hard training, survival skills in sandstorms and the determination with which you have to grasp the purpose of these strange black cubes, which appeared as if from nowhere. It will be a great place! If you tidy up a bit here. Surviving Mars is a sci-fi settlement simulator where your goal will be to colonize Mars and not die in the process. Choose a space agency that will provide you with logistics and financial support, then decide on a place for the colony. Build domes and other infrastructure, explore new possibilities, use drones to improve and expand your settlement. Grow food, get minerals or just relax in the bar after a hard work shift. But most importantly, do not let the colonists die. Which is not the easiest task on an unknown planet. You have to overcome many difficulties. Carefully work out the development strategy of the colony and do not forget to explore the secrets of the new world. You are ready? Mars is waiting for you!

The first extraterrestrial colony of mankind: in order to build a settlement in conditions not adapted for life, you will have to think over and plan everything well. In the event of an error, it is not traffic jams that threaten you, but the death of the colonists. Power outages on a planet with a breathless atmosphere are too expensive.

Unique characters of the colonists: each colonist will be a unique person, with its own characteristics, strengths and weaknesses, which will influence the needs and behavior of the other settlers. Can you imagine what it would be like if the senior researcher of the colony began to go into binges after sleepless nights in the laboratory?

Futuristic styling of domes: domes - huge structures inside which you will place residential blocks, factories and trading floors - are made in retro-futuristic style, each with its own unique look. Create colonies for every taste! You can build a colony where science is placed above all else - even above the lives of the colonists. And you can build a utopia among the stars.

Explore the secrets of Mars: The red planet in Surviving Mars holds many secrets - in the best traditions of Clark and Asimov. In each of the walkthroughs, players may encounter one of Mars' carefully crafted puzzles. And their study can lead the colony to prosperity or disaster.

Research tree with “random” elements: by combining a classic tree with random research, each passing game will be completely different. And do not forget to study the unexplored territories of Mars - this can lead to a scientific and technological breakthrough.

Unique retro-futuristic style: classic futurism of the 1960s in a modern twist, bright and elegant. It's time for exploration and adventure!