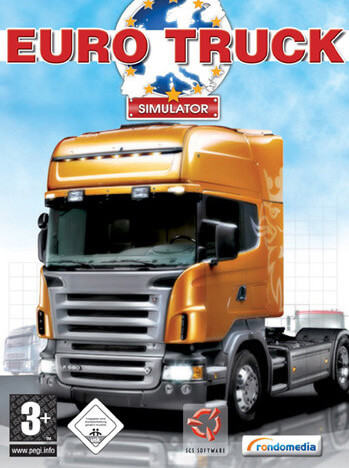 Euro Truck Simulator (known as Big Rig Europe in North America) is a 2008 truck simulation game developed and published by SCS Software, set in Europe. The player can drive across a depiction of Europe, visiting its cities, picking up a variety of cargos, and delivering them. Over 300 000 copies of the game have been sold in Europe. Its followup, Euro Truck Simulator 2, was released in 2012.

The game features European truck models with working instruments such as flashing indicators, temperature and low fuel warning lights, wipers, and gauges. The trucks included are the Mercedes-Benz Actros (known as Majestic), the Renault Magnum (known as Runner), the Scania R-series (known as Swift) and the Volvo FH16 (known as Valiant).

Version 1.0 of the game was shipped to stores in Germany on 6 August 2008. The release date for this version in Poland was 20 August and in the UK, 29 August.

Version 1.3, with improved DirectX compatibility, was released in the UK on CD by Excalibur Publishing and as an online-download, but is not available on CD from the other countries' respective publishers. This version was expanded to include the UK (cities of London, Manchester and Newcastle), a Dover-Calais ferry, plus more roads in Germany and Poland.

The game was generally well received by users, holding a score of 75/100 on Metacritic, indicating "generally favorable reviews".